Incremental or Revolutionary? How the CY2023 Proposed Rule Hits (and Misses) the Integration Mark

For more than a decade, we’ve watched the Financial Alignment Initiative (FAI) evolve from a proposal in the Affordable Care Act to a set of programs operating in nearly a dozen states. FAI offered the promise of integration across Medicare and Medicaid in ways the policy environment hadn’t previously experienced.

That was before we had non-medical supplemental benefits in Medicare Advantage (MA) and enhanced integration requirements for dual-eligible special needs plans (D-SNPs). That was before states realized the strength of the State Medicaid Agency Contract (SMAC) as a tool to promote integration across Medicare and Medicaid. That was before 4 million dual eligible beneficiaries were enrolled in D-SNPs across 47 states.

Which is why CMS is now saying it plans to work with states this year to “develop a plan for converting [FAI Medicare Medicaid Plans (MMPs)] to integrated D-SNPs.”

This isn’t the only big news coming out of the Contract Year (CY) 2023 Proposed Medicare Advantage Rule (“the Rule”), which dedicates 125 pages to changes specific to dual eligible beneficiaries. CMS has been clear that Medicare-Medicaid integration policy change is a journey, and while this proposed Rule is not the final destination, there are several important changes worth highlighting (Figure 1). 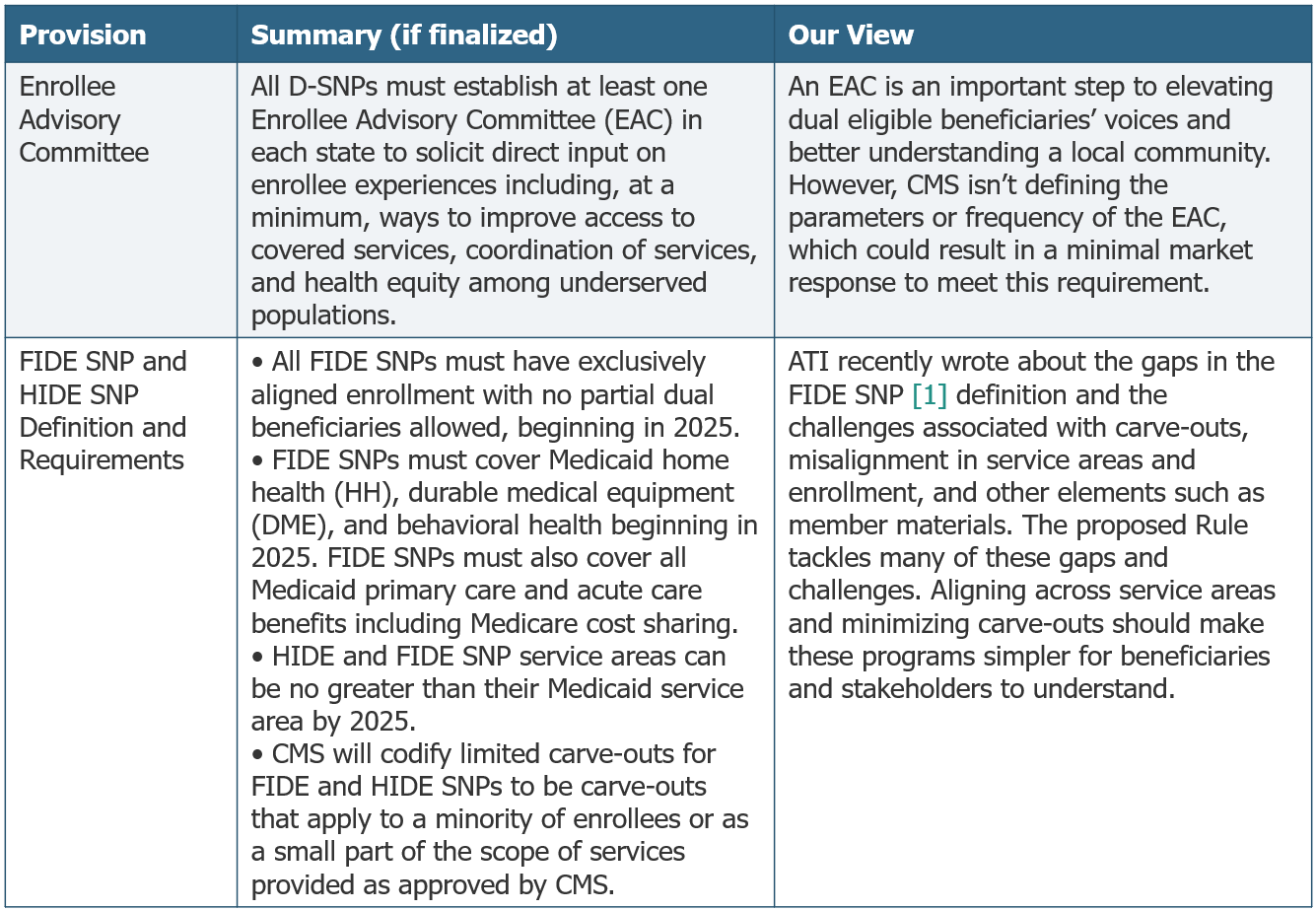 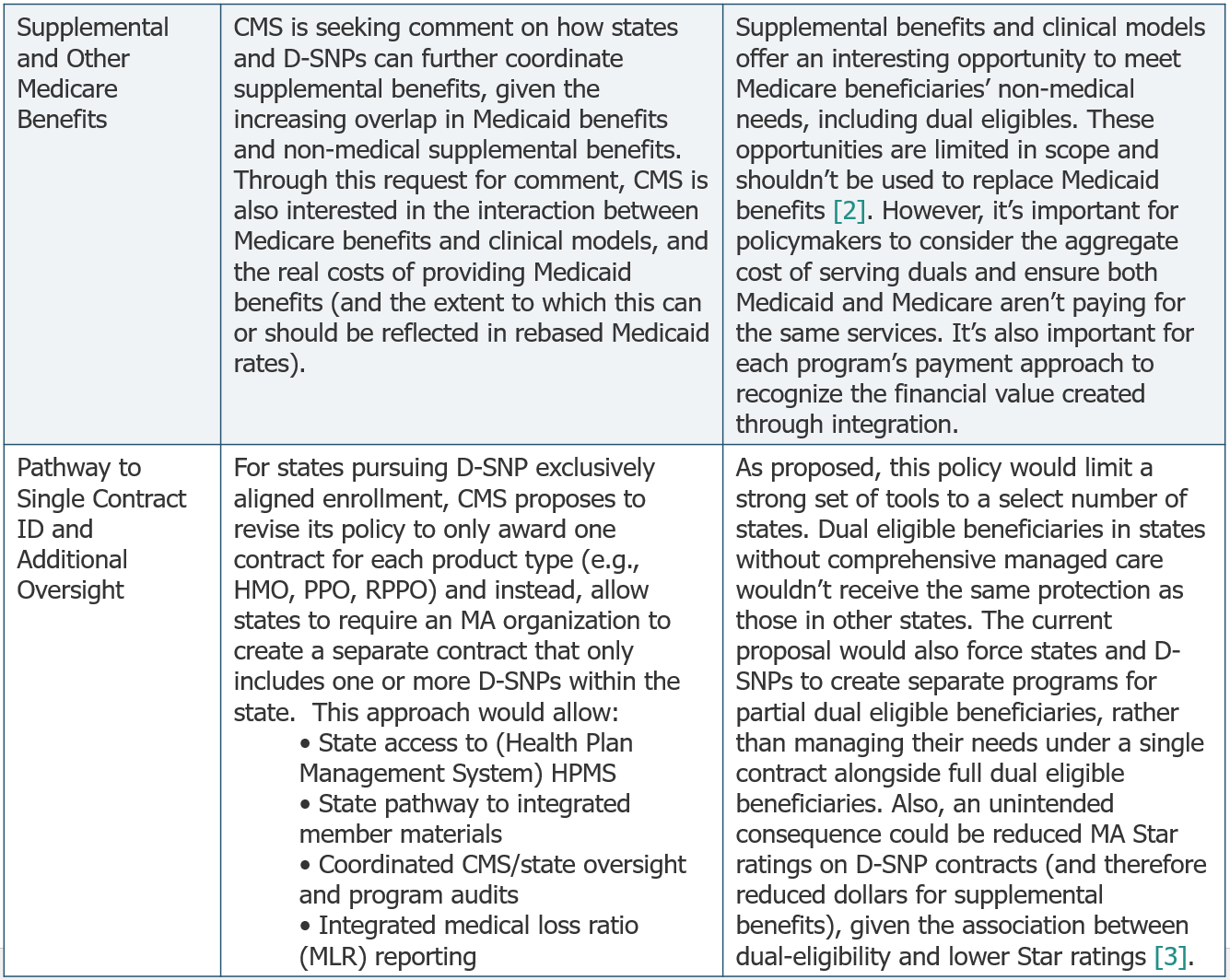 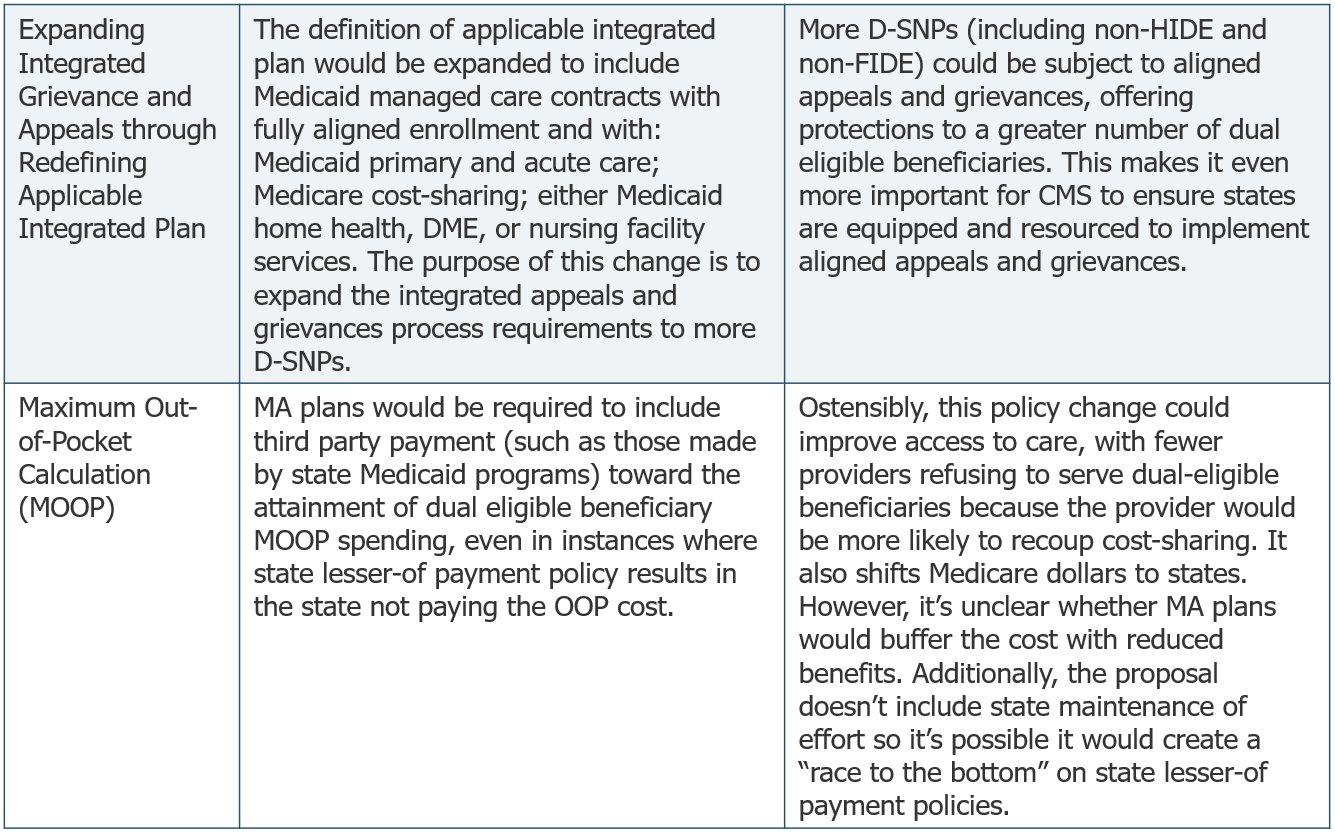 The program has evolved dramatically since then, with a considerable amount of change happening after passage of the 2018 Bipartisan Budget Act (BBA 2018), which added new integration requirements to D-SNPs and provided additional authority to MMCO (the “duals office”) to regulate D-SNPs. Since 2018, MMCO has clarified coordination expectations, implemented data sharing requirements, implemented passive and default enrollment mechanisms, developed lookalike prohibitions, and established an integrated appeals and grievances process.

Over time there’s been a dramatic shift in the D-SNP model, moving from minimal (or no) Medicaid integration to a program that states have considerable authority to influence. However, few states have leveraged this opportunity to its full potential—48% of all dual eligible beneficiaries still lack access to a strong, integrated option in their state or county.

This Rule is the latest in a series of steps towards even greater integration under the D-SNP program, and CMS should be applauded. That said, despite dedicating 57% of the Rule to policies specific to dual eligible beneficiaries, there’s more to do, both incrementally in the short-term and as we think about the longer-term changes necessary for a true, seamless experience for dual eligible beneficiaries (Figure 2).

CMS has been clear about their policy goal of “minimizing disruption” by deploying “incremental changes” – a full system overhaul would shock the system, beneficiaries included. However, CMS has also been clear that we’re only at the beginning of what’s to come. 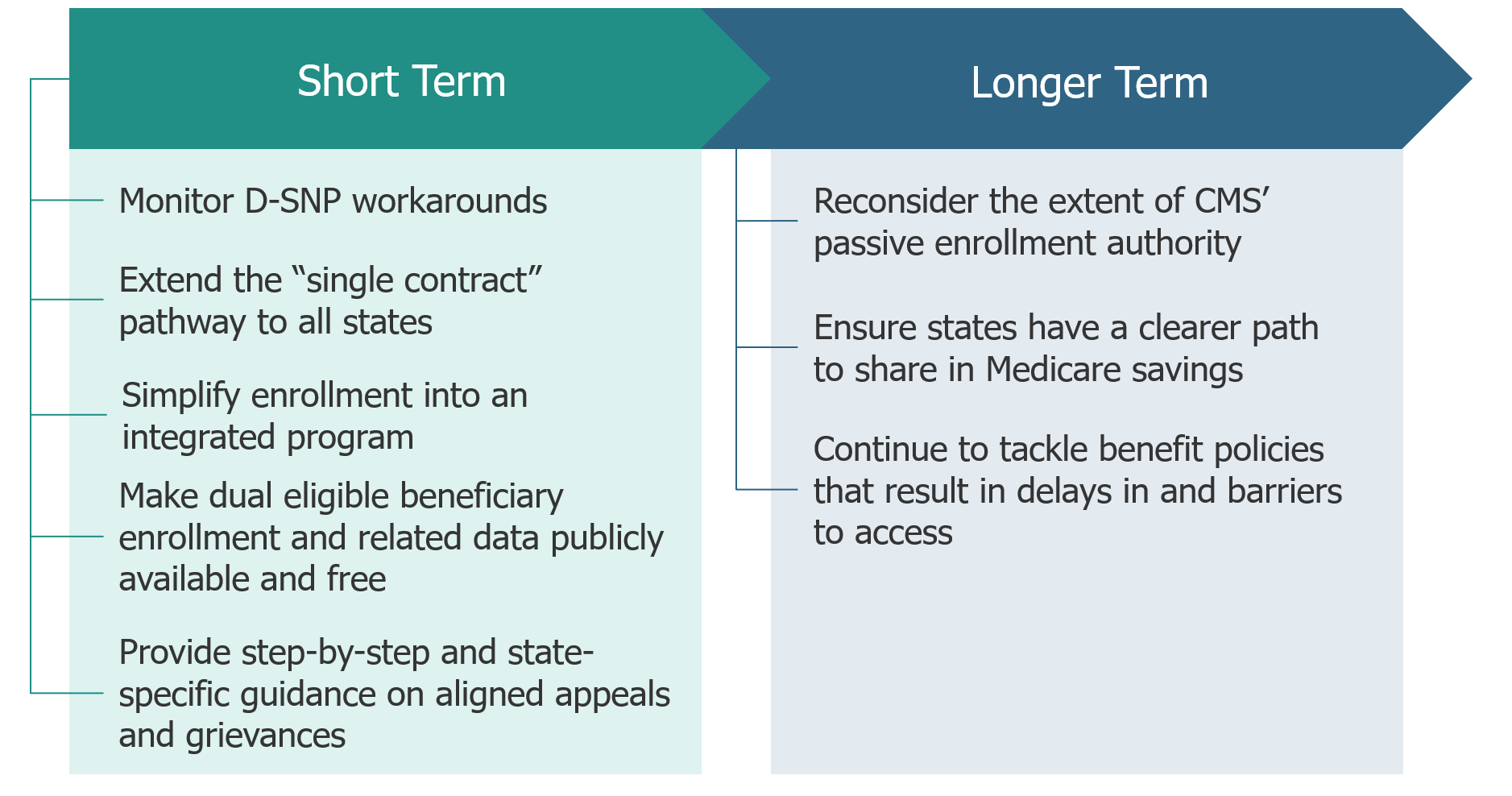 It’s been nearly two years since CMS issued regulations that seek to eliminate look-alikes – non-D-SNP MA plans with a high portion of dual eligible beneficiary members, and that aren’t subject to any integration requirements or Medicaid oversight. Look-alikes started transitioning their enrollment into other plans operated by their organization last year and in 2023, they face contract non-renewal. Currently, the threshold for what’s considered a look-alike is high – an MA plan can have up to 80% dual eligible enrollment before being subject to look-alike regulations (about 4-times the percentage originally required to be considered a D-SNP). Additionally, Chronic-condition SNPs (C-SNPs) have no caps on the dual eligible beneficiaries they enroll.[4] As CMS continues to add structural, coordination, and oversight requirements to D-SNPs, it will be important to monitor the look-alike market to determine whether organizations are “managing to the 80% threshold” or otherwise using C-SNPs to circumvent to look-alike prohibition, and to circumvent integration requirements. Revisiting the 80% threshold will be important too, if integration is really our policy goal.

Many states lack the Medicaid managed care design that would allow for exclusively aligned enrollment, and the process of implementing Medicaid managed care in these states would require significant political changes. Regardless of their state Medicaid program design, dual eligible beneficiaries should have equitable protections. However, the proposed rule would limit the “single contract” pathway and its resulting state flexibilities and beneficiary protections to a subset of states. Even if every eligible state pursued this pathway, there would still be millions of dual eligible beneficiaries without access to the higher level of integration and protection. CMS should extend the single contract pathway to all states. Additionally, CMS should allow states to access HPMS data on any Medicare Advantage plans that enroll dual eligible beneficiaries and operating in their state, not only D-SNPs.

In 2021, dual eligible beneficiaries could choose from 26 different Medicare Advantage plans per county, on average, with most of these options being non-integrated. There were more than 82,000 plans nationwide last year. And the channels intended to help dual eligible beneficiaries with their Medicare enrollment choices don’t always suggest integrated options. For example, State Health Insurance Assistance Program (SHIP) volunteers tend to be well-versed in Medicare but may not be trained on the nuances of enrolling in a product that aligns with Medicaid, or the unique needs of dual eligible beneficiaries. If finalized, the proposed Rule will help by simplifying the definitions of integrated products, but this is incremental. Enrollment choice needs to be easier.

We should know how many individuals are eligible for an integrated experience but are not enrolled in one, either because they remain in Medicare fee-for-service (FFS) or are enrolled in a non-integrated plan. No such data source exists today, making it incredibly difficult for states and researchers alike to understand what the opportunities are, and how to target education efforts or solutions. ATI recently evaluated nearly 20 MLTSS programs to determine the number of dual eligible beneficiaries enrolled in MLTSS but remaining in Medicare FFS, and it was a herculean effort. Short of spending tens of thousands of dollars to purchase access to CMS’ virtual research data center, and then figuring out the programming across dozens of unique Medicaid programs with unique health plan names and IDs, and then pulling enrollment data that are several years old, there’s no readily available data source with this information. CMS should work with states and the CMS data contractor to produce a public-facing database that quantifies dual eligible beneficiary enrollment in integrated programs, those remaining in Medicare FFS but with access to integrated programs, and similarly, those choosing non-integrated programs, such as standard MA plans, when an integrated program is available. This information would illuminate gaps and opportunities for policymakers to focus on.

As a long-term goal, CMS and Congress should think through the policy change needed to pool dollars between the Medicare and Medicaid programs, similar to the MMP but without the requirement to encounter expenses separately to CMS and the State. The “right” approach to shared savings is a blended set of dollars that can be used to meet a dual eligible beneficiary’s needs, regardless of whether the need is addressed through a Medicare service or Medicaid service. Beneficiaries don’t see services as Medicare or Medicaid.

But until we have a seamless program, there are interim approaches CMS and states can consider without legislative change.

For example, the Rule and previous guidance from CMS discuss the potential impact of Medicare [supplemental] benefits and clinical models on state Medicaid payment rates, suggesting states might consider Medicare savings in their Medicaid rate setting. This approach, however, limits savings to states with MLTSS programs and willing to take on the political battle of rebasing rates. Additionally, MA supplemental benefits are tied to Star ratings and complex contract structures that often reflect a broad, non-duals portfolio (another reason why all states should be permitted to require D-SNPs to operate on a standalone contract, not just those with exclusively aligned enrollment).

CMS should work with states to determine additional pathways to Medicare shared savings, particularly if the agency is helping states to transition out of capitated MMPs, where shared savings are directly available. This might include quality withholds and profit reinvestments, and integrated alternative payment models (similar to states being able to rebase their Medicaid rates).

A continued source of stress for dual eligible beneficiaries involves benefits covered by both Medicaid and Medicare. Beneficiaries have to navigate different coverage policies, providers, and eligibility rules. CMS chips away at some of this through the revised FIDE SNP definition in the Rule, which would require coverage of Medicare DME and HH, two primary categories of benefit overlap between the programs. However, this proposal would still leave dual eligible beneficiaries not enrolled in a FIDE SNP with misalignments in coverage. And even in a FIDE SNP, beneficiaries continue to have different coverage rules between Medicare and Medicaid (and overlapping benefits beyond DME and HH). CMS has also attempted to address certain benefit overlaps through guidance that offered suggested approaches to states. However, barriers remain, and a more deliberate policy approach is needed.

Our take? Kudos to CMS for a significant step forward in striving toward a seamless experience for dual eligible beneficiaries. This Rule is the appropriate balance of incremental and dramatic, and it continues to set the tone for what’s to come.

But there’s more to do, and we shouldn’t assume the journey is over.

This insight was developed with support from Arnold Ventures.

[4] Institutional SNPs (I-SNPs) also don’t have a cap on dual eligible enrollment, but by their nature (limited to Medicare beneficiaries who live in a nursing facility or who have long-term care needs in the community), these plans have Models of Care targeted to dual eligible beneficiaries. States have been exploring ways to integrate Medicaid with these plans.

[5] In addition to the broad authority to establish an enrollment process, CMS can deem certain beneficiaries into certain plans during the Medicare initial eligibility period, which is the underpinning of default enrollment, §1851(c)(3)(ii).

You have Successfully Subscribed!